Binge Eating Disorder – A compulsive drive to eat and continue eating well beyond feeling full and consuming ~3,000 – 6,000 calories in one sitting, usually alone.  Binge eating disorder is the most common eating disorder in the U.S., effecting 8 million Americans, yet it is the least talked about.  There is alot of misconception and stigma when it comes to binge eating;  it is not a true eating disorder, no willpower,  lack of control, or that you have to be living in a larger body.

Eating disorders do not discriminate.  Athletes are especially at a high risk for developing eating disorders due to the natural pressure they face in their sport.  Middle school, high school, collegiate, weekend warriors, or professional athletes are all at a high risk of developing an eating disorder which gentics and environment plays a role.  Athletes in asthetic sports are at an even higher risk; ballet, long distance running, wrestling, swimming, gymnastics.

At a high level of training, athletes often follow a strict diet.  Any type of restrictive eating, even unintentional, can backfire and increase the urge to binge.  A binge is much different than overeating or emotional eating.  Having a large bowl of ice cream after a tough day is an example of emotional eating, while consuming a half gallon of ice cream then moving on to a box of cookies can be an example of a binge.  Binge eating disorders are reoccuring and on average lasts at least once per week for 3 months of consuming an excessively large amount of food in a short period of time and is characterized by experiencing a lack of control and significant distress among binge eating.  While overeating is a challenge for many Americans, recurrent binge eating is much less common and much more severe.  Atletes with binge eating disorder are at a high risk for injury, poor recovery, poor performance, and psychological problems.

It is often difficult to identify an athlete with binge eating disorder, as their weight is often  at a healthy weight.  But, they may start to socially isolate themselves from food events, skip meals, or overtrain to compensate for their binge.  Family members and roommates may notice large amounts of food disappearing or empty containers pushed to the bottom of the trash.  Remember, people with binge eating disorder are ashamed and feel they have no self control.  Coaches who are in frequent contact with athletes may notice signs of an eating disorder as well.

1.  Eating too little in front of others.

2.  Training to hard and excessive.

It is important to have a discussion with an athlete who is showing signs of an eating disorder such as binge eating.  It is imperative an athlete receive the treatment they need for support and recovery.   If you know an athlete exhibiting any of these signs, it is best to seek help from a Registered Dietitian who specializes in sports nutrition and eating disorders to help the athlete build better relationships with food and their bodies. 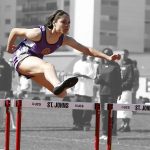